5 people killed at Kabul airport, US troops take over security

Quoted from WSJ, eyewitnesses reported seeing a bloodied corpse lying on the ground right outside the terminal building. Officials at US Central Command were not available for comment. 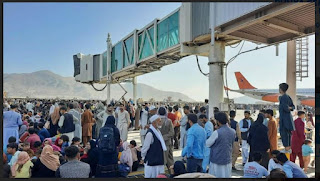 After the incident, the United States (US) military took over security at Kabul airport to carry out a massive transfer of foreign diplomats and citizens after the Afghan government collapsed on Sunday (15/8). The evacuation flights were processed on a separate side of the airport from the military.

The US military has also expanded its footprint to civilian terminals, where there are thousands of desperate Afghans. They used to work for American troops and then the victorious Taliban flocked to Kabul for those who had collaborated with the West.

According to people trapped at the airport, American troops also repeatedly fired into the air to disperse the crowds at night. Hundreds of Afghan civilians were seen close to the runway and around parked planes on Monday morning and some hanging from the tarmac as they rushed onto the planes.

The Taliban entered Kabul on Sunday, having conquered the entire country in recent weeks. The airport is the only place where the Afghan republican flag still flies, but the Taliban have been deployed nearby.

Afghan security forces and other Afghan workers at the airport left their posts on Sunday. They were left without food or water, many people taking shelter in the terminals without passports or reservations.

All civil flights have been cancelled, so their only hope is to get flights chartered by foreign governments and private companies and organizations.

The US military is known to have sent 6,000 troops to Kabul airport to secure the evacuation of US embassy personnel and Afghan nationals who have assisted the US both as translators and in other important roles over the past two decades. While others remain on standby in Kuwait.